Please note that the above could change at any time based upon weather conditions as the landfill site apparently gets slippery when over-saturated by heavy rain.

Information received from Sol Plaatje Municipality via Ward 20 Councillor states that the refuse trucks are currently doing the rounds picking up refuse.

Please note that the above could change at any time based upon weather conditions as the landfill site apparently gets slippery when over-saturated by heavy rain.

The Sol Plaatje Municipality has noted the closing of roads with burning tyres and threats against motorists by some residents especially around Roodepan areas and parts of Galeshewe. Reports on the closure of R64 to Boshof by informal miners have also been received. We call on the different community stakeholders to desist from this form of protest and allow the Municipality to implement what was presented in our detailed discussions on service delivery. We reiterate our commitment towards ensuring that challenges as outlined are being attended to and with the help from the Provincial Executive, we will definitely be able to turn things around.

We would also like extend our apology to the public as some of our services like refuse collection is being negatively affected in these areas due to safety concerns.

At this stage we are unsure if refuse will be picked up in areas normally serviced on Mondays. No refuse truck has been seen yet today, suggesting that it is not running due to the protest action in Kimberley. No info has been received as yet from Sol Plaatje Municipality with regards to the refuse.

Refuse collection will proceed as per usual today, Monday 5 April 2021, unless Sol Plaatje make an unexpected change to their schedule.

Due to the various protest actions taking place in Kimberley and a resultant lack of workforce to do the necessary removals, there will be no refuse removal today, Thursday 25 March 2021.

This was confirmed by the Foreman of Waste Management.

Sol Plaatje Municipality’s Sanitation Department have now stated that they will be removing refuse bags as long as weather permits. Tuesday 23 March refuse which was not collected, will be collected together with the refuse collection Thursday 25 March.

Sol Plaatje Municipality’s Sanitation Department have confirmed that refuse will not be collected today, Wednesday, 24 March 2021. They further state that they will arrange to remove refuse bags which were scheduled for Tuesday and today (Wednesday) to be removed on Thursday if weather permits.

Sol Plaatje Municipality have stated on their Social Media Page that there will be refuse removal today, Thursday 04 February 2021, starting with the areas that were skipped due to rain (Wednesday schedule), thereafter the teams will pick up refuse in the all those areas normally collected on Thursday.

Sol Plaatje Municipality have stated on a Ward Councillor’s WhatsApp Group that there will be refuse removal tomorrow, Thursday 04 February 2021, starting with the backlog (Wednesday’s Program) continuing until they’re finished with the Thursday Schedule.

According to a few posts by Sol Plaatje Ward Councillors, there will be NO refuse removal today, Wednesday 03 February 2021, due to the rain.

No official notice as of yet published by Sol Plaatje Municipality with regards to the refuse removal.

There will be NO refuse removal today, Wednesday 27 January 2021, due to the rain.

No refuse removal will take place due to the rain . Our apology for the inconvenience caused.
Via Sharon Steyn

According to a message received from the Cleansing Section to Ward 25 Councillor Ockert Fourie, there will be NO refuse removal today, Tuesday 5 January 2021.

Refuse removal for tomorrow (Wednesday) will be dependent on the weather.

It was confirmed by Cleansing Section that NO refuse removal will take place today.
Refuse removal for tomorrow will depend on the weather.
Reported as conveyed to me at 08h54 on 5 January 2021.
Ockie Fourie
Cllr Ward 25

Due to the ongoing heavy rain we are unable to collect refuse for all Areas usually serviced on Monday.
A catch up programme will be implemented to deal with the backlog. We sorry for the inconvenience.

We are currently busy with Refuse collection in Southridge, El Toro Park and New Hillcrest. De Beers area will be collected today and tomorrow as part of catching up. From Monday till Friday next week, it will be normal collection. We sorry for the inconvenience.

THE SOL Plaatje Municipality’s nine refuse trucks are expected to be back on the road after they were pulled off the city’s streets earlier this week because of expired licence discs, which necessitated renewing the certificate of fitness.

Municipal spokesperson, Thoko Riet, said the trucks all needed to go through roadworthy before receiving the certificate of fitness (COF).

“Two of the trucks passed the COF on Tuesday afternoon,” she said.

Meanwhile, testing of the remaining trucks started at 6.30am this morning and by 10am a number had already passed the COF and were back on the road.

“These trucks will be collecting refuse in areas that are normally collected on Wednesdays,” Riet added.

Of the nine trucks that were put through roadworthy, four needed to have their brakes adjusted and were expected to be given the all clear by this afternoon.

Meanwhile, Riet stated that areas that had not been collected this week would be collected on Saturday.

“We humbly apologise for the inconvenience,” Riet said.

Residents in certain parts of the city have faced three weeks of non-collection of refuse bags and many threatened to stop paying for rates and services, which they complained was non-existent, while others called for rubbish to be dumped in front of the municipal offices.

“The uncollected bags are creating a health hazard,” one resident said.

“For three weeks already we have had to keep our bags inside our yards and with the current heatwave, they are attracting flies. We already have maggots crawling around everywhere.”

“Some people didn’t take their rubbish bags inside and those have now been broken open and the rubbish strewn all over the street.

“It is time that the Sol Plaatje Municipality provides the service for which residents pay and which it relies on to pay its employees.”

CITY residents have been dealt another blow in the ongoing saga regarding the lack of service delivery from the Sol Plaatje Municipality after the local authority confirmed that there were no refuse trucks available … because the licence discs had expired.

The latest blow comes after a week-long strike by municipal employees resulting in the non-collection of refuse for up to three weeks already in some areas.
Municipal spokesperson, Thoko Riet, confirmed on Tuesday that the licence discs on the municipal refuse trucks had expired.
“Before we can apply for new licences, we have to take the trucks in for a certificate of fitness,” she said.
According to Riet, the refuse collection trucks were currently at the municipal workshops for assessment.
“We will know what the situation is and how long the process will take once the assessments have been completed,” she stated.
Irate city residents have threatened to stop paying for rates and services, which many state are non-existent.

“The uncollected bags are creating a health hazard,” one resident said. “For three weeks already we have had to keep our bags inside our yards and with the current heatwave, they are attracting flies. We already have maggots crawling around everywhere.”

“Meanwhile some people didn’t take their rubbish bags inside and those have now been broken open and the rubbish strewn all over the street.
Irate city residents have threatened to stop paying for rates and services, which many states are non-existent. on to pay its employees. If the municipality cannot do its work, it should be dissolved by a court of law, like the Makhana Municipality in Grahamstown. The Makhanda High Court ordered the Makana Municipality to be dissolved and placed under administration for violating its constitutional mandate by failing to provide basic services to the community. The situation in Kimberely is no different – despite the constant speeches by the Executive Mayor, Patrick Mabilo, that service delivery will be prioritised.

According to a message on Social Media from the Refuse Department Manager, refuse areas normally serviced on Thursdays should resume without any disruptions tomorrow 15 October 2020.

In a post released on Social Media, all Sol Plaatje workers are due back at work on Thursday, 15 October 2020.

How this affects the current week’s refuse removal is still yet unknown.

Due to the ongoing strike by municipal workers at Sol Plaatje Municipality, there will be no refuse removal for the week.

We will update as soon as we receive more info with regards to this.

Due to the ongoing strike at Sol Plaatje Municipality, there will be no refuse removal today, Monday 12 October 2020

We will update as soon as we receive more info with regards to this.

Some areas normally serviced on Mondays were skipped due to a SAMWU (South African Municipal Workers Union) Meeting and SP Refuse Removal Personnel are on strike as from Tuesday, 06 October meaning there will also be no refuse removal on Tuesday, 06 October or Wednesday, 07 October and possibly the rest of the week.

Areas normally serviced on Tuesdays will be picked up as per usual today, but unfortunately areas that were skipped on Monday, 28 Sept, will only be picked up next week Monday, 5 October 2020

Via Ward 24 Cllr, Sharon Steyn: Ward 24 I have just received message from SP that our refuse will ONLY be collected next Monday. We must put our refuse back in our yards i was told.

NO REFUSE COLLECTION DUE TO COVID-19 INFECTION

THE SOL Plaatje Municipality has informed residents that there will be no refuse collected today (Monday, 28 Sept 2020) following a confirmed case of Covid-19 at the municipality’s cleansing section.

Municipal spokesperson, Thoko Riet, said all refuse trucks were currently being disinfected, resulting in the service being suspended today.

“Refuse collections will resume on Tuesday.”

She urged all households normally serviced on a Monday to place their black bags back inside their properties. 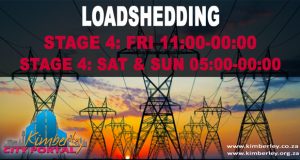 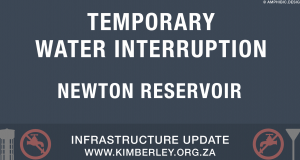