Kimberley’s St. Boniface High School was for many years a mission church and school run for Blacks by mostly German priests and nuns, opening as such on 12 April 1926. But by 1950, the St. Boniface Mission School, which included elementary through high school grades, had grown so large that the parish leadership had decided that a male religious order would be better suited to the size and stature of the school. An Irish Christian Brother, Paul Dunn, C.F.C., already served as the elementary school principal. He suggested the Christian Brothers to serve the school. Br. Ferdinand Clancy, C.F.C., Superior General of the Brothers, wrote to the Brother Principal of the American Province, Br. Austin Gleason, C.F.C., requesting they send Brothers to found an independent high school in Kimberley. Forty Brothers out of 100 province-wide offered to join in the mission.

Two men were chosen, Brs. Elphage Enda St. Martin, C.F.C., and John James Hayes, C.F.C. The school was named St. Boniface High School, carrying on its original name, and opened for classes in January 1951. The school grew tremendously during the early years, and was funded both by the parish and the state. Relations with the South African government became icy as it became known that the Brothers were offering the students a college preparatory education.

After the Minister of Bantu Education met with Principal Br. Hayes, the school no longer received government funding, and relied nearly solely on American aid. In 1959, Br. Hayes was deported from the country for his publicly known anti-Apartheid sentiments and actions, and Br. St. Martin replaced him as principal. He later came back to visit the school in 1997 once Apartheid had ended. He was by then a layperson, having left the Brothers.

During the 1960s, the school expanded its extracurricular and athletic programs significantly.

The first dramatic performance at St. Boniface was Oklahoma! organized and directed by Br. Joseph Matthews, C.F.C., math instructor and sports coach. The school also added a brass band, the Stardusters, founded by Br. Michael Malvey, C.F.C. He wrote to the New York City Police Department, which donated the unused instruments from their recently disbanded brass band. A fellow teacher from a wealthy family, Br. Stoltz, C.F.C., quietly paid for both the purchase and shipment of band uniforms and the shipment of the instruments. (From Wikipedia, with changes).

The Mission church burnt down on 18 February 1966.

The school celebrates its birthday as from January 1951 however, and not from April 1926.

CITY HALL DECLARED A NATIONAL MONUMENT
The Kimberley City Hall, an outstanding piece of Victorian architecture (in Roman Corinthian style), was designed by the well-known Kimberley architect Fergus Carstairs-Rogers and opened on 20 September 1899, a mere few weeks before the siege of Kimberley commenced. Kimberley’s previous Town Hall had been destroyed by fire on 29 March 1898, and on 13 April it was decided to build a new hall to meet the requirements of a growing town. The Directors of De Beers donated a sizable sum of money towards the building costs. Fergus Carstairs-Rogers won the design competition from nine finalists, pocketing the £100 prize money. 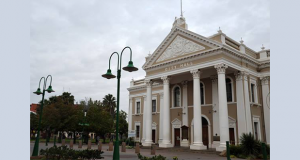 On 16 November 1898 the foundation stone was laid by Moses Cornwall, then Mayor of Kimberley, the plans for the building consisting of a main hall and council chamber, a supper room, a Mayor’s parlour, a committee room, the Town Clerk’s office, and several administrative offices. The Hall was built by local firm, Grant and Downie, and completed at a cost of £26000, and was officially opened by the Mayor of Kimberley, Robert H. Henderson. The Hall would be the administrative and executive centre of Kimberley up until 1962 when the municipality moved to the current Civic Centre. During the siege – 14 October 1899 to 15 February 1900 – the Hall was used as the pivotal point for the issuing and rationing of food and for a time was a haven for refugees.

A public poll to save the City Hall from demolition was held in 1971, and was successful due to the effort by former Mayor Lawrie Shuttleworth. The so-called coloured population were permitted to vote, and it was their vote that saved the Hall. Note the original Kimberley coat of arms on the parapet, as well as the motto “Spero Meliora” – “We hope for better things”. The Kimberley coat of arms had figured on the council’s seal since 1878. The fleur-de-lys and annulets on the shield are taken from the Arms of the Cape Colony; the diamond is there for obvious reasons; the Lion Rampant is emblematic of Kimberley’s original recognition of British supremacy and allegiance to British aims and ideals.

TODAY IN KIMBERLEY’S HISTORY 16 MAY

TODAY IN KIMBERLEY’S HISTORY 13 MAY

TODAY IN KIMBERLEY’S HISTORY 12 MAY

TODAY IN KIMBERLEY’S HISTORY 09 MAY

TODAY IN KIMBERLEY’S HISTORY 05 MAY